The Centers for Disease Control (CDC) requires that Counseling Testing and Referrals (CTR) be part of every Evidence-Based Intervention (EBI).  The Mpowerment Project is a useful intervention to promote HIV testing. From 2009 to 2012, testing was a core component at our Dallas TX Mpowerment demonstration project, United Black Ellument / U-BE.

RESEARCH READ: Among young men who have sex with men (MSM) of color, participating in the the Mpowerment Project (MP) led to an increase in HIV testing and self-efficacy for safer sex after 3 and 6 months.  More here. via UCSF Center for AIDS Prevention Studies (CAPS)
RELATED:  What is the Mpowerment Project? Download Module 1: Mpowerment Overview.


This occurs often in implementation of MP: an agency having a coordinator work 20 hours a week on CTR and 20 on Mpowerment (MP). This was not a good idea. CTR can overwhelm MP responsibilities, especially if you only have one coordinator and limited staffing. 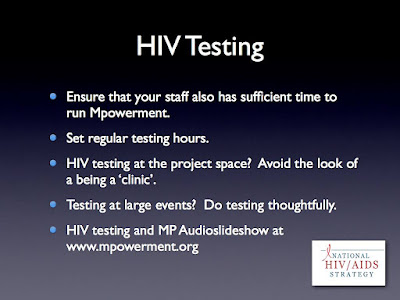 MP encourages peers to talk to their friends about the importance of knowing your HIV status by getting tested regularly, and getting on treatment if positive.

Young men are taught to have these conversations in the three-hour small groups called 'M-Groups'. Young men listen to each other and discuss a wide variety of issues. It’s important that they have the opportunity to talk with each other about important issues such as HIV testing, sex, and treatment options. The Project Space also has referral information on HIV testing sites and services, and the staff of most MPs are trained to provide HIV testing and counseling for their MP membership.

RELATED: 5 important questions for the Mpowerment Project to ask itself.

Check out more of the The Q Austin, Mpowerment TX sandwich boards here:  This is a Facebook link: The Q Board. 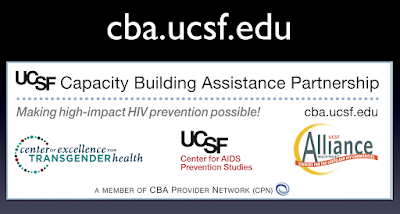 cba.ucsf.edu
Posted by The Mpowerment Project at 12:36 PM